Top 7 water parks in the world

Whether you’re looking for fun thrills or laid back leisure, water parks cater for absolutely anyone and are a great memorable experience to enjoy whilst you’re on your holiday. Here are seven of our top water park picks from around the globe to give you some inspiration on where to visit first. 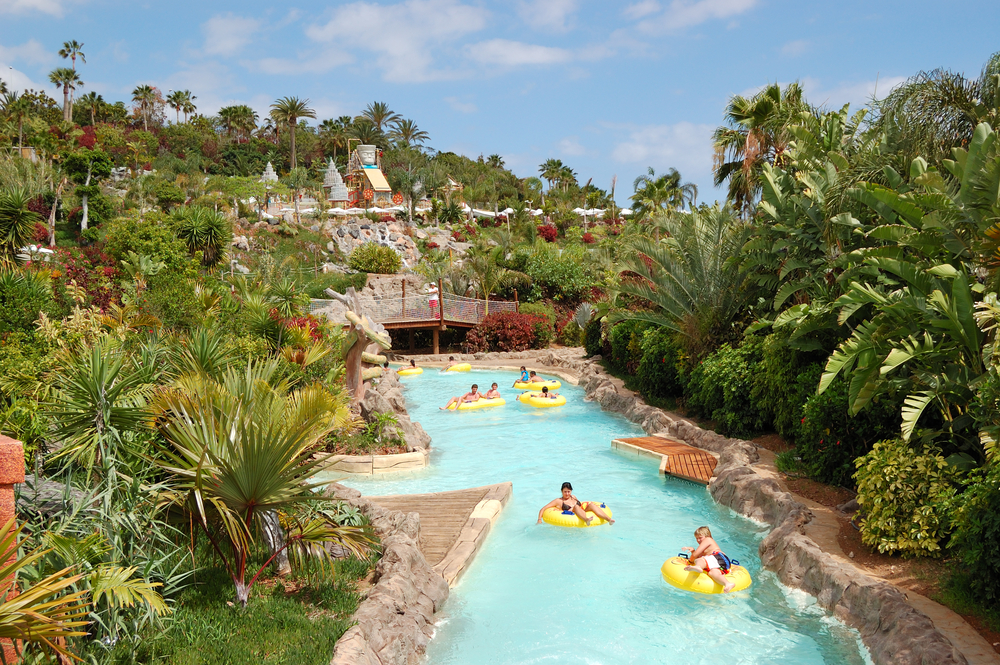 Renowned as one of the most exciting water parks in Europe, Siam Park first opened in 2008 and has 12 fun-filled attractions. This year the park was awarded a new Travellers’ Choice 2016 Award, presented by Trip Advisor, for being the No. 1 Water Park in the world for the third consecutive year. One not to miss for the adrenalin lovers out there is the Tower of Power, which has a 28-metre sheer drop. On your way down, you slide through the aquarium (passing the shark tank as you go!) before making your splash landing in the pool (which is shark free!).

If you want to simply float and watch the world go by, the Mai Thai Lazy River is the longest in the world and takes you around the whole park, including past an impressive tropical fish aquarium and lush waterfalls. For the little ones, The Lost City with its Baby Zone is perfect, with safe and gentle slides so no-one is left out of the fun! 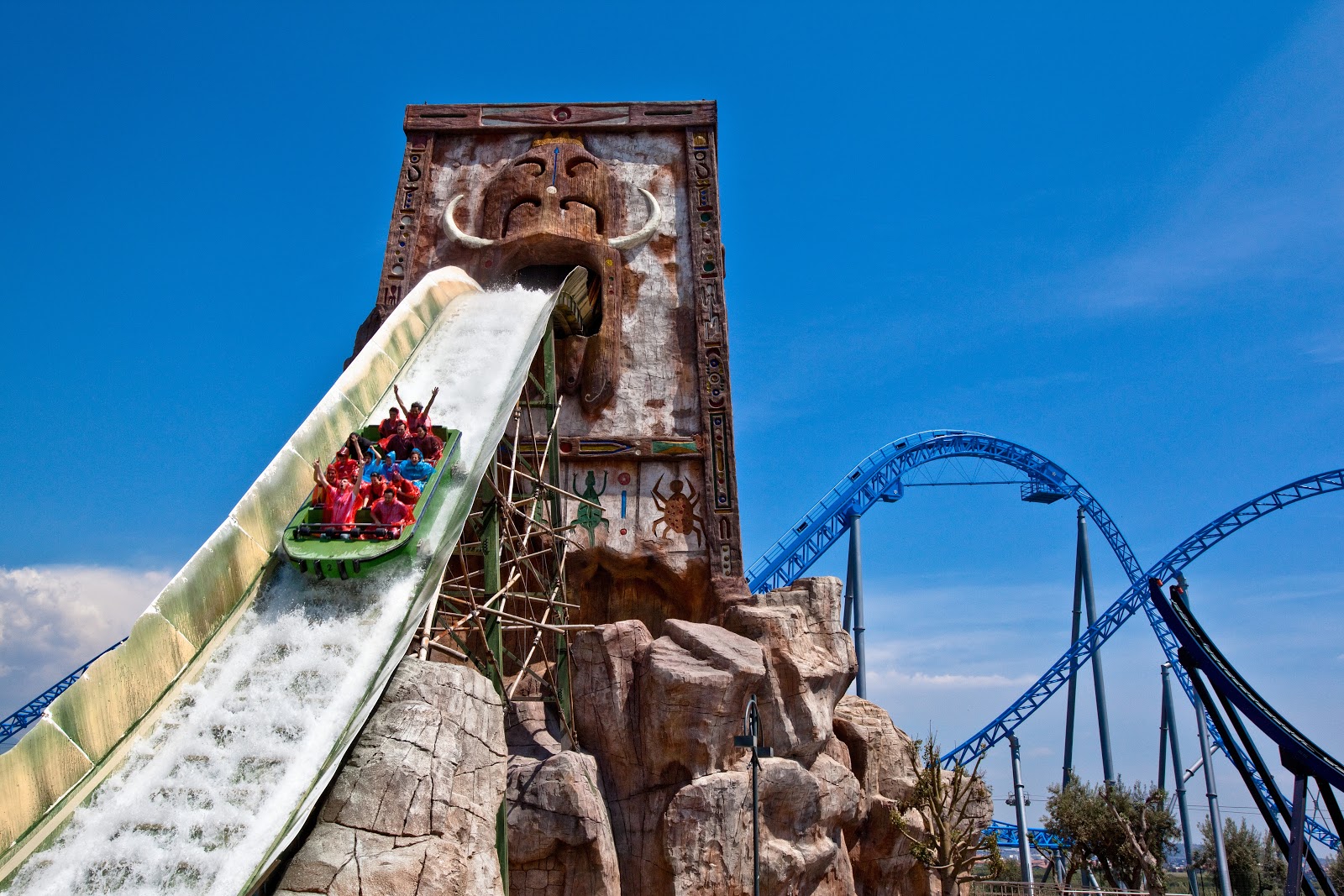 Situated at the foot of the magnificent volcano Mt. Etna, Etnaland has both a theme park and aquapark. The aqualand, opened in 2001, is the biggest amusement park in South Italy and boasts top notch attractions which include: the extreme Super Red Cannon, where two brave thrill-seekers are up against each other and are sucked down a clear tube before landing in the pool below.

Another favourite is Stukas (named after the famous German fighter plane),  a steep slide with a sheer drop, as well as The Dark Kamikaze, which is the only fully dark and enclosed slide. Fancy causing some chaos amongst the other guests at Etnaland? Head to Kaos, a ride that lets you shoot water at other ride participants in a bid to see who can get the most soaked!

One of Etnaland’s coolest adventures to embark upon is Jungle Splash, a 20-seat boat which has a hair-raising 30-metre final drop. You can also enjoy the largest wave pool in Europe at Etnaland, where the waves operate in one-hour intervals of wave-soaked fun. There’s also a miniland specifically for young kids and toddlers, which has a children’s lagoon, children’s lazy river and a mini toboggan. 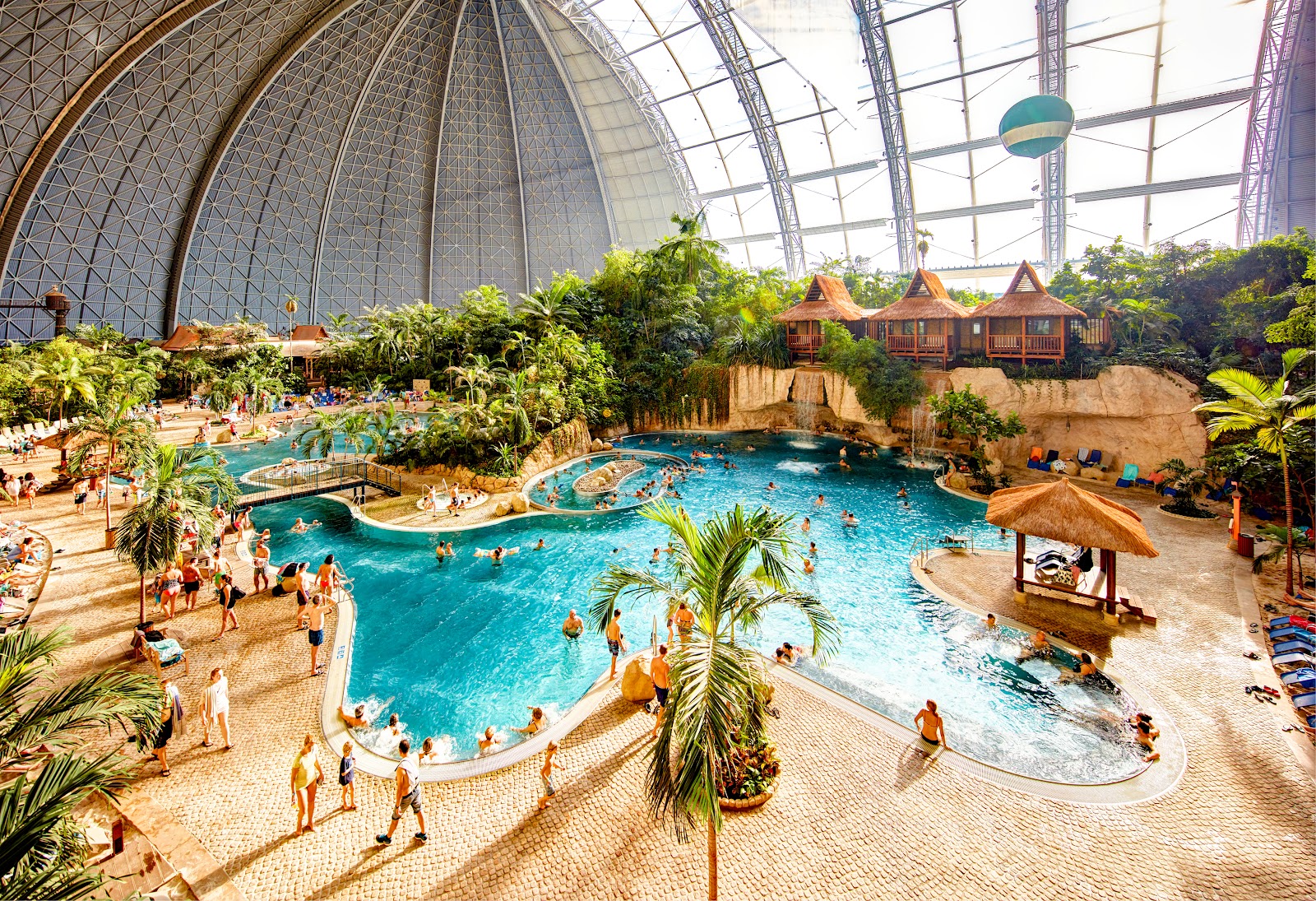 An hour south of Berlin, Tropical Islands is an indoor paradise with warm weather, palm trees, waterfalls and white sandy beaches. Dubbed ‘Europe’s largest tropical holiday world’, the indoor island houses a lagoon and a 200m-long Tropical Sea,with sun loungers and palm trees giving you the feeling of being in a luxurious tropical location. Why not give scuba diving a go in the 28°C water? You can also find a selection of thrill-inducing water slides - including the tallest water slide in Germany, which is 27 metres high!

In the Magical Lagoon, swimmers can enjoy a Bali-inspired atmosphere, with a waterfall, genuine Monkey Rock, as well relaxing 32°C lagoon waters. There is also a new outdoor area, Amazonia, with its Whitewater River proving a massive hit with visitors from around the world.

If you’re looking for a taste of the tropics without a long haul flight then Tropical Islands is the perfect place to visit. Plus, thanks to its indoor location and all year round possibilities, you can have fun no matter what the weather throws at you - even in winter!

Once a former ski resort (hence the ‘frosty’ name), Disney’s Blizzard Beach is the 3rd most visited water park in the world and is open all year. Blizzard Beach has a plethora of attractions, including the Downhill Double Dipper (where you can race your friends), Chairlift (a relaxing ride which flies around Mount Gushmore), Slush Gusher (a 90ft long fast water slide), Summit Plummet (the world’s fastest and tallest freefall slide), and something for all you Frozen fans out there, the Frozen Games (in the summer). This is a fantastic park to visit if you have young children, they won’t want to leave the water! Described as Dubai’s best water park, the #3 best waterpark in the world and the #1 waterpark in the Middle East & Africa, the spectacular Aquaventure Waterpark has some very impressive features. The Tower of Neptune looks like something out of an Indiana Jones movie and has pitch-dark tunnels that launch you into the Shark Lagoon. Those of you who are brave enough can take the Leap of Faith, with its 27.5m near-vertical drop through a clear tunnel in a shark-filled lagoon!

Then there’s the Aquaconda - officially the world’s largest waterslide; you glide through a winding black tunnel before being released into a fibreglass tube (the biggest in the world!). Don’t miss out on Zoomerango, which offers a very different experience with its blend of sudden plunges and sensations of flying.

Not only can you enjoy a host of rides and attractions, but Aquaventure is the only park in the Middle East where you can enjoy animal encounters, including being able to feed hungry rays in the water! Need somewhere to chill after a busy morning hitting the slides? Head to the 700m long private beach or feel like a VIP in one of the private seating areas. If you’re looking for the perfect combination of thrill-seeker favourites and relaxing family fun then this impressive Dubai waterpark is the perfect place to visit. 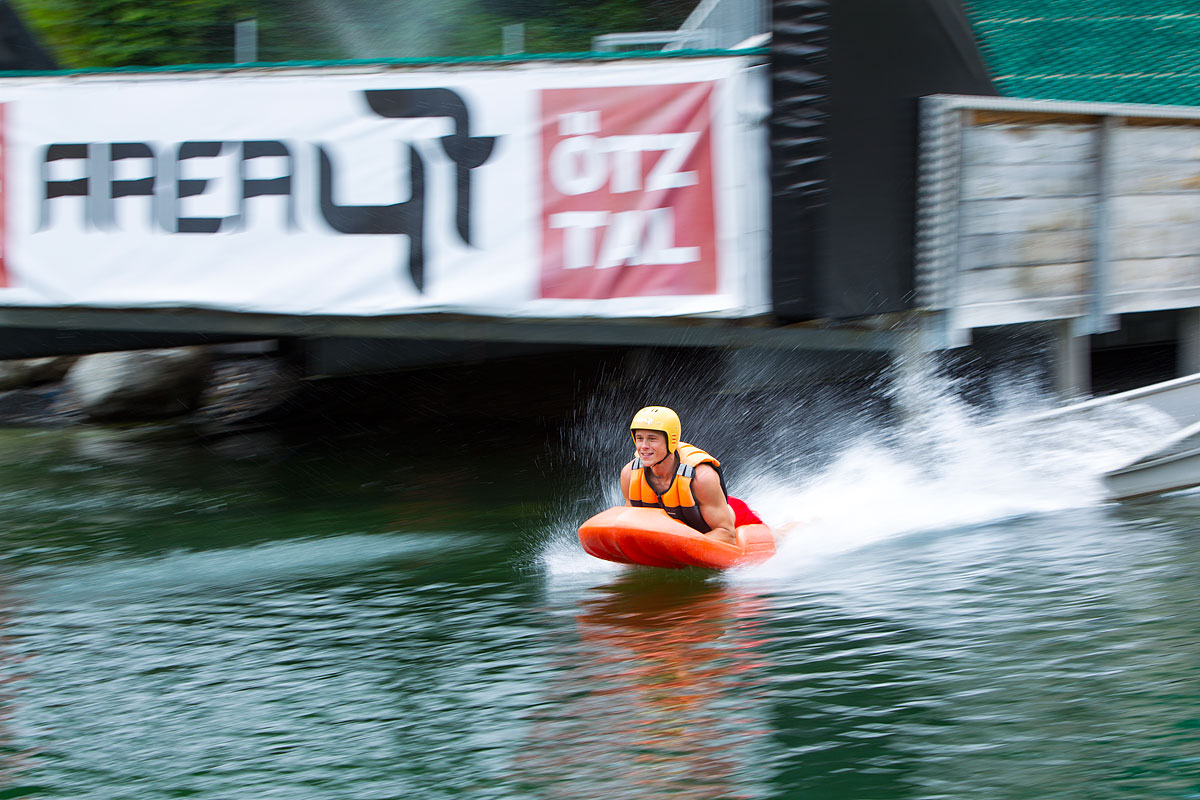 AREA 47 is a waterpark like no other, made for serious adventurers! Only 30 miles from Innsbruck, AREA 47 is 20,000 square metres of adventurous fun. Here, one of the many activities you can enjoy is blobbing (and truly feel like you’re appearing on Total Wipeout). For those who aren’t ‘in the know’, a blob is a giant inflatable cushion where you are launched high into the air (3m to be precise) before plopping into the water.

Ever wanted to be a human cannonball? Then the cannonball is for you, where you’re briefly catapulted into the atmosphere. You can also navigate your way through the rest of the water park. Want a little taste of what’s on offer? Think rafting, canyoning, a 20,000m2 large Water AREA with giant slide park, hydrospeed-slide, sports trampolines, cliff diving training facility, “Deep Water Soloing“-climbing wall, the highest high ropes garden and the highest climbing wall in Austria, a 27-meter high rope swing, zip line, river surfing and much more. Plus, you can find Western Austria’s first Wakeboard Centre - a two-hectare large lake with everything needed to make wakeboard enthusiasts, and budding enthusiasts, very happy.

According to the people behind the park, “adrenaline aficionados will find the greatest variety of outdoor activities in Europe in one place” at AREA 47. What more could you want?

China’s largest amusement park, Chimelong Paradise, has award winning water attractions. On the Tornado ride, visitors get to sail around on a giant clover-leaf ring, circling round a cone slide before landing safely in the pool below, giving the sensation of really being in a tornado. Other rides include the Family Boomerango (great for getting family and friends stuck in with all the fun), Master Blaster, Dual Waves, Family Python, Extreme River and more. The waterpark saw 1.9 million visitors in 2011, making it the 2nd most popular water park in the world.